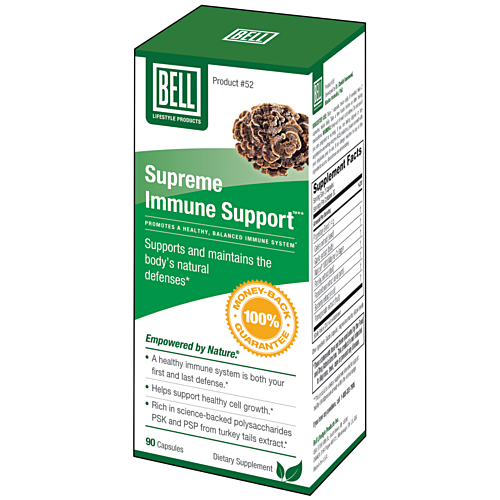 Skip to the beginning of the images gallery
Details

The maintenance of a healthy immune system is one important aspect of maintaining overall wellness. Natural nutrition can be especially helpful in optimizing your immune system. Over centuries of traditional use and decades of modern scientific validation, one food has emerged as perhaps the greatest immune-supporter: the humble mushroom.*

Supreme Immune Support features trametes versicolor extract (also known as turkey tails and coriolus versicolor), a mushroom that is so highly regarded for its wellness benefits, its sales reach hundreds of millions of dollars annually in Asia. This medicinal mushroom has been the subject of much study in the Far East, where research has focused on two compounds: Polysaccharide-K (also known as PSK or polysaccharide krestin) and polysaccharide peptide (PSP), which both exhibit notable immune-supportive properties.*

Studies have shown that trametes versicolor and its polysaccharides contain notable levels of antioxidants. These antioxidants scavenge free radicals, which are produced by immune cells, among other sources. While a normal amount of free radicals isn't necessarily problematic, an abundance of them can negatively affect immunity. As they take out harmful excessive free radicals, the antioxidants of Supreme Immune Support aid the immune system and help to maintain overall well-being.*

Polysaccharides, are carbohydrate molecules with long structures that have been shown to assist in modulating the body's immune responses, functioning as “directors” in optimizing this complex and all-important body system. Researchers have suggested that trametes versicolor-derived PSK and PSP, found in Supreme Immune Support, appear to positively influence the activity of immune cells while modulating the body’s immune response.*

Bodybuilders and other athletes are starting to discover the benefits of trametes versicolor mushroom extract. Many find that they have more energy for workouts, higher levels of athletic performance and of course a strengthened immune system, to fight off all of the germs that may be present in gyms, locker rooms, and sports facilities. Our trametes versicolor extract contains a total of 40% polysaccharides, which is considered very potent and effective.*

2) No shipping on Sat, Sun and Public holidays

4) Due to Covid 19, certain areas may experience temporary delays